Mokhudushong as it is affectionately known, is a small section of 44 relocated houses within Monametse Village in Limpopo Province. The decision to relocate was taken after numerous engagements between community structures and Bokoni Platinum Mine over complaints by the community of Monametse Village of cracked houses. However, Bokoni Platinum Mine resorted to relocating only 44 households as they were deemed to be in extreme danger as they were too close to the mine’s operations.

This is the third time that the Mokhudusong community homes are being rebuilt. The rebuilding of houses has resulted in extensive complaints of damages to furniture and other belongings as residents must move their furniture up and down from their houses to rented rooms while the rebuilding is undertaken. The mine has refused to cover the costs of the damages.
Mr Mohuba a resident of one of the houses claims that “the reason the houses are being rebuilt so many times is due to the soil they build on. It is not suitable for infrastructure. And as a result, the houses have cracks in the foundation. Some houses have become dangerous for the families to live in: he says. “We wish they could remove us from this place because this soil is muddy. If you build on a mud surface the house will surely crack. The people responsible for building our homes don’t care about us but they only care about money” he lamented.
Mr Mohuba also claims that Mine “will not tell you the budget of each house”. He goes further to claim that “they most definitely will never agree to compensate us for our household goods that are being damaged in the house e.g. beds, TVs, stoves and more. What’s more painful is that they rebuild some houses while others must repair the houses at their own expense and it is obvious this will be a continuous problem for years to come”.
“Not knowing the budget of each home is a problem for us. They don’t make any public consultations before building or demolishing houses. Things like how much is the budget for the project. We are told that each home must deploy one member as a beneficiary that will work during the duration of the project and that’s all,” said Mr Makgopa another resident deeply aggrieved by the ongoing struggle for justice
.“It would have been better if we get a lump sum from the mine. In that way we will choose much better grounds to build our homes to ensure their sustainability and strong foundations” according to Mr Mokgotho. He adds that “some members (of the community) build on their preferred grounds, while others did not relocate because of family bonds to the land and because of their livelihoods”.
From our engagements with the community, it is clear that most community members of Mekhudusong think this relocation in not ideal. The community have no insights into the budget of the project. The community have not been consulted and remain unclear about why some houses are being rebuilt while others are being patched when they face the same challenge.
The community is desperate for a long-term solution, but with mines who are a law unto themselves, it looks like their struggle for justice will continue. 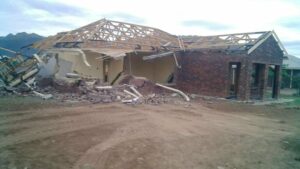 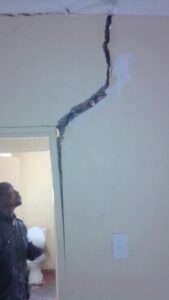 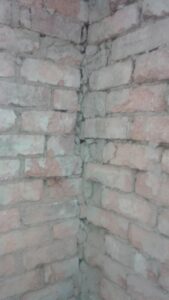