“Ignored by the Municipality: Community of Tshamahanzi forced to take matters into their hands as their roads continue to deteriorate”.

The rural environment is critical to the development of any country. The food supply of the country are grown in rural areas and the rural populations are custodians of the environment and ecosystems. Planners of rural development need to be experts in the complexities of these interconnecting priorities and need to know how the road provision fits into the larger goals of rural development, and the priorities for economic and social growth.
After the Mogalakwena Municipality’s Public Works Department in Mokopane Limpopo Province turned a deaf ear to the terrible conditions of roads Tshamahansi Section for two years, locals have now taken it upon themselves to bring about a change. Keeping aside their household activities and regular work, residents picked up shovels to fix the dilapidated roads on their own.
“We are now forced to fix our streets on our own. We used to call for help from our councilors, but we are ignored. So, we decided to keep quiet and fix the streets on our own. This is one Street whereby cars are no longer passing on that street, and it’s a main road, where community taxis are passing by to collect and deliver people it gets worse when it’s raining and the streets become worse than before” said one resident
Disappointed over the poor road conditions, villagers informed that medical patients, students and daily office goers are the worst affected while travelling along the village road to their respective destinations.
“Many a time, medical patients, especially pregnant women, could not reach the nearby hospital on time,” a resident said. “Many accidents have also been reported from the locality in the past due to the poor condition of the road. We have been waiting for quite a long time, hoping that some kind of initiative will be undertaken from the part of municipality, but it did not happen”, he said.
Women, men, elderly people and children walk from village to village every day when going to work, school and to the shops and even when they go and fetch water. Women push wheelbarrows on this road when fetching water. The dongas are getting bigger and it doesn’t look like the municipality will fix the roads soon.
After the rainfall the tar road from Tshamahansi and Magongwa villages looks like a river. Children who walk to and from school on daily basis are at risk of these water flows school and this has created fear among parents and especially among women, because it is difficult to walk on the roads when they bare in this condition. Some women are even forced to accompany their children to school before going to work. The problem was reported to the previous councilor, and nothing happened, A new ward councilor has been elected but nothing is happening. Service delivery is a challenge in the community of Tshamahansi and Magongwa. But as a community the people of Tshamahansi and Magongwa are determined to not be victims, but to organize themselves to ensure that these matters are addressed. 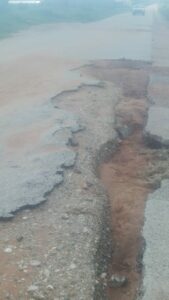 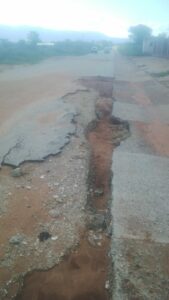 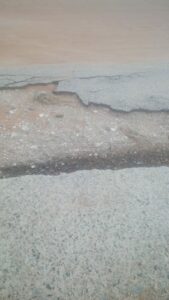